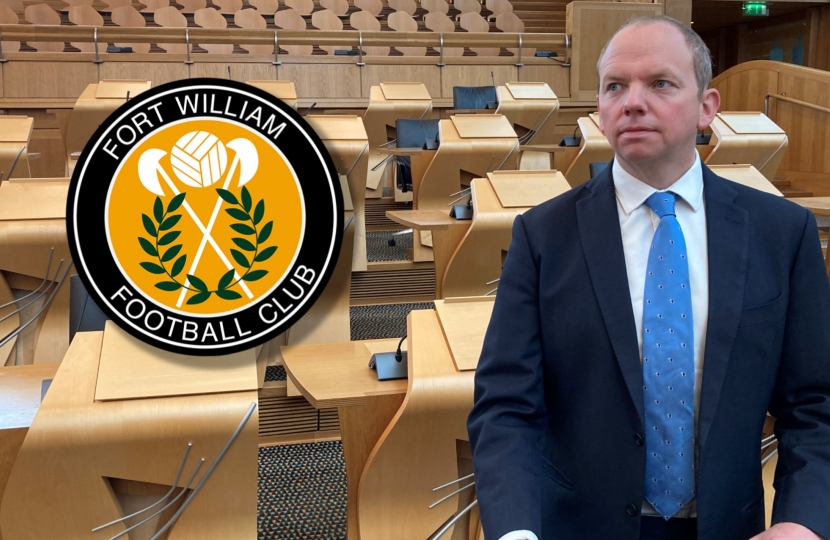 The appointment of a new manager to Fort William Football Club has been highlighted at Holyrood.

Highlands and Islands Regional MSP Donald Cameron submitted a motion to the Scottish Parliament welcoming the appointment of Shadab Iftikhar, whose footballing career has included posts in the North West of England, Mongolia, and the South Pacific.

Mr Cameron said: “There can’t be many people whose career has taken them from Wigan to Lochaber via Mongolia and Samoa, so Shadab certainly brings unique experience and perspective to Fort William Football Club.

“I’m sure Shadab will receive a very warm welcome from the team’s supporters and I wish him every possible success as he takes over the reins at the club.”

The text of Donald Cameron’s motion is provided below:

That the Parliament welcomes the appointment of Shadab Iftikhar as the new manager of Fort William Football Club; understands that Shadab began his footballing career with Wigan and Everton under manager Roberto Martinez, writing scout reports on opposition clubs before becoming reserve manager and subsequently manager of non-league English club Hesketh Bank AFC; recognises that, after completing his UEFA A licence, Shadab moved to Mongolia to manage New Mongol Bayangol as well as being assistant manager of the Mongolian national team before a stint managing Samoan top flight side, Vailima Kiwi FC; further recognises that he re-joined Roberto Martinez as part of his coaching staff at Euro 2020; acknowledges that Shadab is the first manager of South Asian heritage in senior Scottish football; hopes that this will provide inspiration for other young BAME people to get involved in sport, and wishes Shadab and Fort William FC success on the pitch.

A subsea connection delivering renewable energy generated in the Western Isles to the north of Scotland has been welcomed.